Father’s day at MLZS, Vidyaranyapura was celebrated with zeal. Baby Aadya Vinod Murgod of Sr. KG welcomed the crowd with a warm welcome speech. . We had requested the fathers to be dressed in any fairy tale characters along with their child for a fashion show. Few fathers took the initiative to dress their child as fairies and came on the stage and expressed their true love for their child.
The enthusiasm of all fathers was electric and thoroughly enjoyed all the games.
Prizes were distributed to the winners and our little Nisarga A Rao delivered vote of Thanks.
They went to their respective classrooms where they were given the take aways prepared by their child.
On the whole MLZS’s aspiration to bring all dads of MLZS and their child together to spend quality and fun time together was a grand success. Management and staff thank all the fathers who contributed to this success. 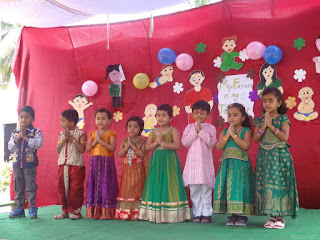 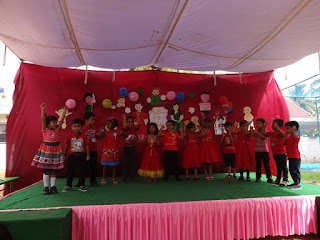 Thirsty crow game: All the fathers along with their child were asked to become the clever crows in two teams (team A & B). They picked up the pebbles and dropped them into the pot. Team A crows finished the race first.Take a position game: They were asked to walk in circle with the music & asked to take one position among standing face to face, back to back, one standing and the other sitting & standing beside each other when the music stopped. As one position was announced, whoever had taken the announced position was out of the game. The father-child duo that stuck to the game till the end and won first prize was Avantika of Nursery & her father Mr. Anand Kumar and runner up pair was Aditya Sakaray of Sr KG and his father Mr. Munindranath 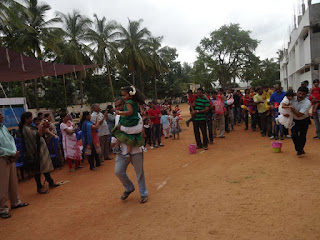 Passing the ball: This game was exclusively for fathers. They had to stand in backward position in a circle and pass the ball to the next participant. This way they passed and again the team A finished and bagged the first position. 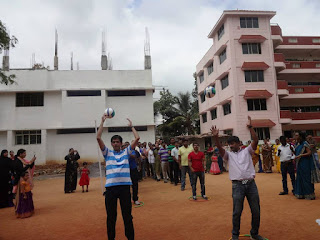