Shortest Day of the Year !

At last, winter is here. Which also means nights are longer and days are shorter. Looking out the window at many times during the night and finding it is many hours until daybreak and then burying ourselves deeper into the sheets is one of life’s greatest pleasures. Many of us who can’t seem to get enough sleep regard the longest night of the year as nature’s way of rewarding us. 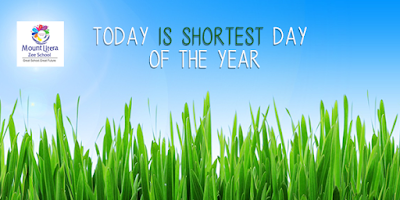 When the Sun reaches its highest or lowest excursion relative to the celestial equator on the celestial sphere, resulting in solstice twice each year (in June and December). Both the solstices and the equinoxes are directly connected with the seasons of the year. It is the winter solstice in the Northern Hemisphere, where it is the shortest day of the year. In the Southern Hemisphere, it is the summer solstice and the longest day of the year.


December solstice is when the North Pole reaches its furthermost tilt away from the Sun - 23.5 degrees. On this day, the Sun’s lowest possible maximum elevation is reached. The result is the shortest day and longest night of the year. The term ‘Winter Solstice’ is commonly used to describe the shortest day of the year even though the solstice itself lasts only for a few moments.


Winter solstice traditionally falls on December 21. Each year the solstice is pushed back by six hours as the Earth’s orbit of the sun actually takes 365.5 days. This year it will fall on the 22nd.


The historic site of Stonehenge in Britain, built between 3,000 to 2,000 BC, attracts visitors every year to observe the Winter Solstice. Many cultures have their own traditions for the Winter Solstice. It is thought that the dark and evil spirits are most potent on this day. In China, the subsequent longer days symbolise a rise in positive energy in the universe.