The Story of Maha Shivaratri 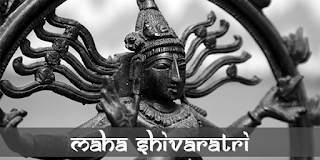 
The Trimurti (‘Three Forms’) is a Hindu concept consisting of Brahma (the Creator), Vishnu (the Preserver) and Shiva (the Destroyer). Together they perform the cosmic functions of creation, preservation, and finally the destruction or transformation.

Shiva means the ‘The Auspicious One’ and is depicted as having a third eye on his forehead, a snake around his neck, the crescent moon in his great locks, the river Ganga flowing from his hair, the trishula or the trident in his hand and the damaru as his musical instrument.

Following are the main iconographical attributes of Mahadeva (‘Great God’), one of the many names of Shiva,  and their significance:

●      Third Eye: Also known as the inner eye, it provides perception beyond ordinary sight.
●      Snake: The serpent is said to represent ego, after controlling of which it can be used as an ornament.
●      Crescent Moon: The moon’s waxing and waning phenomenon is symbolic of the time cycle through which creation evolves from the beginning to the end.
●      River Ganga: The holy river represents the nectar of immortality.
●      Trisula: The trident represents the three Gunas through which he rules the world. The three Gunas are passion (rajas) which creates, goodness (sattva) which sustains and ignorance (tamas) which destroys.
●      Damaru: The small hourglass shaped drum represents the OM aum) sound, which forms the basis of all the other languages.

Maha Shivratri (Great Night of Shiva) is one of the great Hindu festivals celebrated throughout India and also by the diaspora in the rest of the world.

It depicts the wedding of Goddess Parvathi and Lord Shiva, marking the convergence of Shiva and Shakti, the divine feminine creative power that represents the dynamic forces moving through the universe.

The day is marked by offering of Bael leaf to Shiva, chanting of ‘Om Namah Shivaya’ and an all-night vigil known as jagaran.

The Shiva Purana outlines the mode of worship on Mahashivaratri:

Like all great festivals, Maha Shivaratri is a day to celebrate life itself.

It is a day to cleanse our mind and body. Fasting helps us to detoxify the body and a night of wakefulness (jagaran), is meant to awaken us in true sense of the word.

Maha Shivaratri falls on March 7 this year and we at Mount Litera would like to wish everyone happiness, prosperity & peace on this auspicious occasion.